Pittsburgh area family has been with CCA for 12 years and values the school’s process of evaluating student performance.

Heather’s time student teaching in a city school while she was earning her elementary education certification prompted her to explore cyber school for her firstborn, which marked the start of a long run for the family. All three of her children wound up enjoying a CCA education.

As Heather worked that job while pursuing an elementary education certificate, she said, she saw a lack of institutional stability.

“They were closing schools and reopening them a year later under a different name to get different funding,” Heather said, adding that many districts were placing kids in schools where they simply did not belong and the quality of their education suffered.

Fellow parents in the community advised Heather to look outside her area’s public school district for educational options when it was time for her firstborn, Justin, to start school.

When Justin began reading at age 4, Heather knew he was probably ahead of kids in his class. Rather than waiting for a long placement evaluation at a private school, she began researching cyber schools.

“CCA had a questionnaire asking where you think your child performed,” she said. “I gave my feedback, they called, interviewed Justin, and said they agreed with my feedback.”

Justin immediately started ahead of kids his age with CCA’s material that challenged him.

Now, 12 years later, Heather’s family continues to build a legacy at CCA. Justin is an alumnus attending college, while Connor and Bridget are in the eighth and ninth grades, respectively. Heather said CCA’s advanced curriculum has given her kids an edge over their peers.

“I knew how challenging it was compared to what I was seeing and doing with my undergrads,” she said. “I really like the focus on the writing process and reading.”

Heather said she believes a technology-based curriculum combined with resume-building programs better prepares students for college and life after CCA.

As for socialization, Heather’s kids have had no shortage of activities to participate in. Their favorite is the Adventure Club, in which teachers compete against students in friendly games that double as team-building exercises.

“If you take advantage of the field trips and the activities that the school provides, there are more than enough opportunities,” Heather said.

A flexible class schedule allows for extracurricular activities beyond the school’s offerings. Bridgette has dance classes five nights a week, while Connor follows in his brother’s footsteps by playing baseball. The family took a trip to Disney in May, with another planned this year, all while regularly participating in their classes.

What resonated most with the entire family was Justin’s graduation ceremony, a full family event that included dinner. Heather said the family was impressed with the speech by Dr. Maurice Flurie, CCA’s CEO, because it embodied the school’s core values and its future, and looks forward to two more graduations.

“We’re really happy with CCA. I couldn’t even give another cyber school a thought,” she said. “They have made so many positive changes over the years that we are just so totally happy with it.” 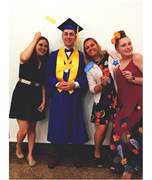