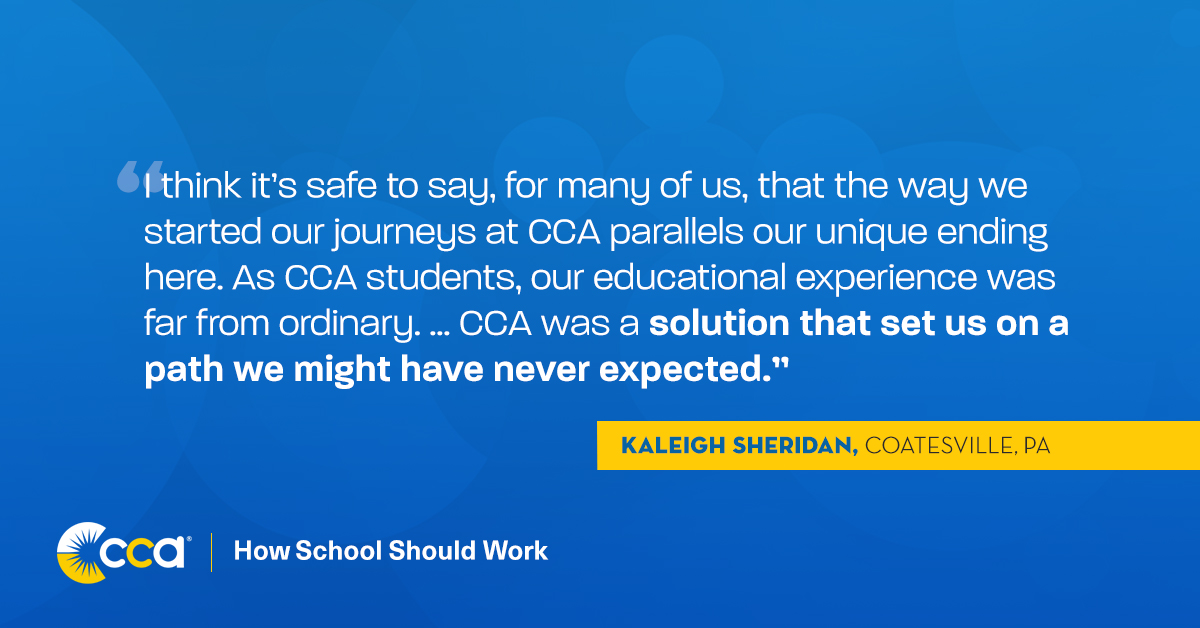 As a graduation speaker, Kaleigh had a message for her classmates: Keep moving forward and don’t look back

Originally said by G.K. Chesterton, these words were the defining element of Kaleigh Sheridan’s graduation speech to the CCA class of 2020. They also apply to her dreams of working in politics.

Kaleigh explains her rationale behind choosing the quote, saying we are “faced with a new world and a new challenge because of the pandemic. It can be easy to hate what is in front of us because of the hardships it has brought, but I hope everyone will recognize what is behind them now and realize everything they love as they move forward.”

Kaleigh, a Coatesville native, began at CCA when she was in the second grade; her older sister and one of her younger sisters had made the switch to CCA, and Kaleigh and her parents felt the time was right for her to leave the local brick-and-mortar school as well.

“I wasn’t striving but wasn’t struggling,” Kaleigh explains. “There wasn’t exactly anything wrong with the school for me, but my mom wanted to find something better for my family and in that she found CCA.”

She also enjoyed the field trips CCA provided as part of the educational experience. One of her first was to see the Liberty Bell in Philadelphia.

These trips helped the content she was learning to come alive. The field trips also connected students who had only been classmates virtually. In eighth grade, they went to Valley Forge, which they could connect with the history they were learning and where they could meet with classmates.

Kaleigh has a passion for lifelong learning and serving her community. Through her time at CCA, she developed these skills. She is poised to begin college in the fall, ready to make a difference.

“I think that, as a CCA student, the flexibility and way my schooling was set up allowed me to research more in my free time,” she says. “I became more of a lifelong learner and wanted to research on my own. I wanted to be a truth speaker outside my own school assignments. I could build those skills so that I could explore more on my own too.”

In the fall, Kaleigh will be attending Liberty University, where she will study law and policy. She dreams of being a lawyer or maybe working at a policy institute or think tank, somewhere she can make a change in her community. Involvement in the American government, Kaleigh says, is how she can best serve her community. Kaleigh’s CCA experiences with AP Government, AP U.S. History and Future Business Leaders of America educated her about government and politics while giving her an environment to interact with like-minded peers.

Following in her older sister’s footsteps, Kaleigh spoke at the CCA virtual graduation and was honored to share her story with her classmates.

“CCA allowed my family to grow close together,” she says. “All three of my sisters and I were at CCA, and it was great to experience CCA together and support each other. CCA allowed us to have an opportunity to grow close to one another as a family and just be best friends.”