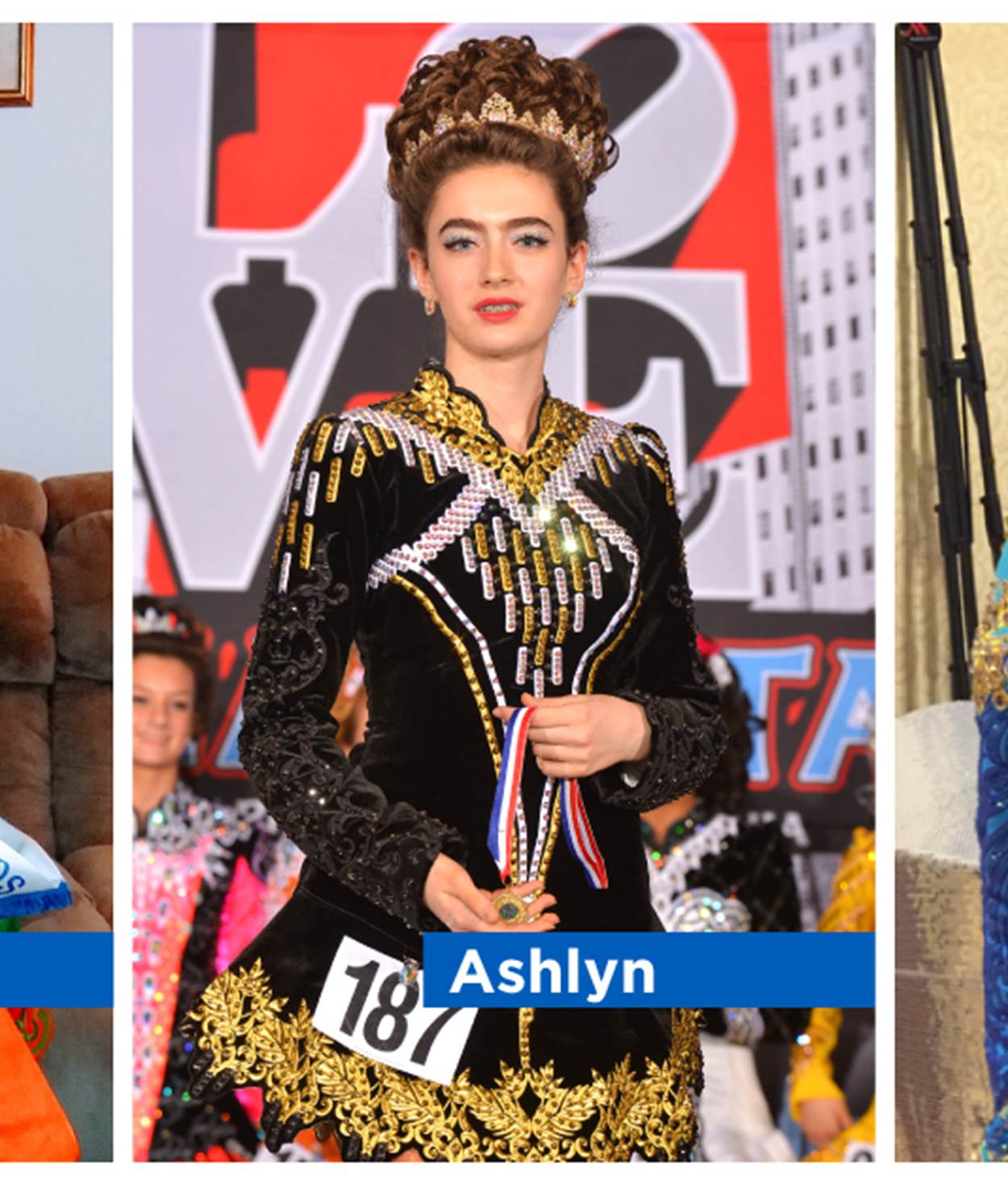 Students credit school’s flexibility to allow them to compete on national and world levels.

Dating back to the 18th century, Irish dancing has been a significant part of Irish culture and heritage. While Irish dancing is predominantly featured at Irish-themed events such as St. Patrick’s Day, many Irish dancers practice vigorously and participate in competitions year-round.

Because Irish dancing is a difficult skill that takes strength utilizing many different muscles, dancers typically train for hours, multiple days a week, and travel to competitions on the weekends. For these students, having a school setting that can fit into their packed schedules is essential.

The flexibility at CCA has allowed three students to pursue their passions for Irish dancing, allowing for their rigorous training and long-distance traveling schedules.

Aisling has competed in national and world competitions with her team. She has traveled to compete in Boston, Rhode Island, Chicago and New Orleans.

“Nearly every weekend, she competes in competitions in the Mid-Atlantic area, which is one of the main reasons we enrolled at CCA,” said Ellen George, Aisling’s mom.

On the weekends she competes, she often travels to areas in New York and Connecticut.

“The flexible schedule helps to make sure she doesn’t have to worry about homework over the weekend when she is competing,” Ellen said.

Although she is only 14 years old, Aisling practices her dancing five to six times every week. In addition, she does personal training every evening in order to strengthen the muscles she utilizes in her Irish dance movements.

“Cyber school gives me more time to work out and stretch,” Aisling said. “I don’t have to go straight from school to dance.”

Just last month, Aisling traveled to Ireland to compete against dancers from all over the world.

“Going to Ireland was a really fun experience,” Aisling said. “I got to talk to some of the best dancers in my age group and reunite with some of my friends who live in Ireland.”

Alonah Lowry is another CCA student who shares the same passion for Irish dancing. Alonah is an eighth-grader from Carlisle. She has had a love for dancing since she was 9 years old, although she has only been training in Irish dance for a few months. Before she was introduced to Irish dancing, she did ballet, tap and hip-hop dancing.

“After a while, she was more interested in the competitive circuit, and she is now training with the best school in the area,” said Dionne Lowry, Alonah’s mom.

After attending two camps over the summer last year, Alonah’s dance teacher asked her to compete. She was told that she would need to start as a beginner to learn the basics. With an amazingly mature attitude, she accepted this rule, her mother said. She studied hard and at no time she was moved forward in levels. In fact, in only a few months she was competing in a regional competition.

Alonah performed at U.S. regionals in the fall in Harrisburg, where she performed in 11 dances and medaled in nine of them. She also won first place in her division.

“Many kids work for four or more years before entering a major competition like that,” Dionne said.

Alonah dances on Tuesdays, Thursdays, sometimes Fridays, and on Saturdays and Sundays when she is preparing for upcoming competitions.

“On a typical day, she starts her school work at 9, then has three hours on average of training each night, and then comes back and does school work,” her mom said.

Alonah has been a CCA student for three years now, but the home she found at CCA isn’t only a great fit for her dancing schedule, but for the unique way it fits her learning as well.

“The brick-and-mortar school didn’t allow Alonah to shine the way CCA has,” Dionne said. “She has been able to maintain her good grades and train for 12 to 15 hours a week,” Dionne said. “We wouldn’t be able to do it without CCA.”

When asked why her family chose CCA for Alonah, Dionne said it was a matter of finding a school with the right support system.

“I thought that it might be a easier type of school, after attending public school on the autism spectrum, because she can perform so well academically,” Dionne said. “The communication part was a challenge and we didn’t get the support we needed at the brick-and-mortar school.”

“We are so happy with CCA,” Dionne said. “We get the right support and modifications and Alonah has made distinguished honor roll every semester.”

In December, Alonah participated in a competition in Philadelphia against much older, more experienced dancers. There, she had two first-place finishes and placed fourth in another event.

“CCA allows Alonah to pace herself and balance school with dance,” Dionne said. “It isn’t rushed and she can really understand the materials.”

Despite only competing for about five months, Alonah ventured to the North American Open Competition in Baltimore in February 2018. Alonah’s parents just wanted to have fun and enjoy the experience of a national-level tournament, knowing the competition would include older, more experienced competitors. But yet again, Alonah returned far from empty-handed. She won a total of nine awards, including first place in her division out of 11 competitors.

“I was so excited,” Alonah said. “I ran to the award stand to get my sash and award.”

Since the competition, Alonah has moved up to the next level of dancing, graduating her out of the beginner division and into the second level of competitive Irish dance.

Ashlyn Sparks is yet another CCA student who rises early every day to work out and train six days a week. Ashlyn started Irish dancing about 12 years ago. However, she said it was only in the past two or three years that she has really thrown her “heart and soul” into it.

When Ashlyn decided to invest such a large chunk of her time into Irish dancing, she already had been a student at CCA since kindergarten. Ashlyn said she believes that without the cyber school setting at CCA she could not have reached the success in dancing she has so far.

Because she can do her schoolwork at her own pace, Ashlyn can spend more time step dancing, while still maintaining her 4.2 GPA.

“It’s nice because of the flexibility of how the school works, that helps me have more time for dancing and practicing and stuff because I get to work at my own pace which gives me more time,” Ashlyn said.

For Ashlyn, passion for Irish dancing runs blood deep. Her mother, Heather Sparks, has been a trainer, dancer and coach in Irish dancing. She has more than 30 years of experience and is owner of McElligott School of Irish Dance in Stroudsburg. Heather has been Ashlyn’s teacher since she first began dancing.

Because she can make time for her schoolwork in a way that fits into her schedule, Ashlyn often takes the time to volunteer in her community, performing at retirement homes, churches and autism awareness events.

“I think there are few things you can do that mean as much as helping out in your community and reaching out to people who really need it, not just doing things for yourself,” Ashlyn said. “I think of it as a privilege.”

At just 15, Ashlyn traveled to Ireland for the All Irelands Dancing Championships, where she performed in front of a full audience and a panel of judges without making any mistakes. While it was Ashlyn’s first time attending this competition, the experience re-ignited her drive and she returned with even more focus and determination to reach her Irish dancing goals.

“For me, getting to see some of the world-qualifiers and medalers was like being in a room with super star athletes,” Ashlyn said. “Just watching them and seeing how amazing they were really inspired me to do better and be the best version of myself.”

Ashlyn is working to qualify for the upcoming U.S. Nationals competition in July.

E-Books vs. Print — What’s Better for Your Child?