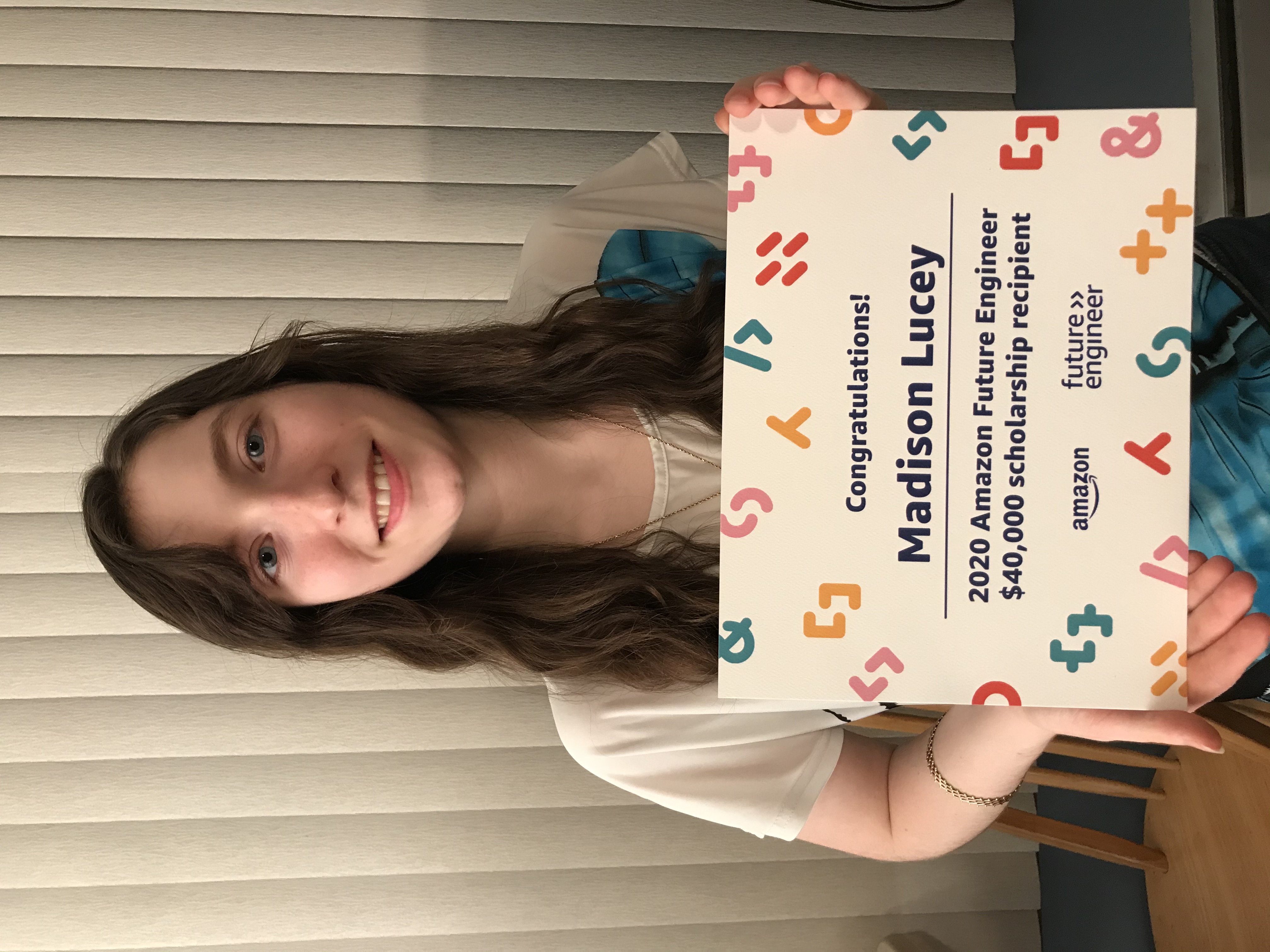 On March 23, I woke up to a package on my front door. It was an overnight package from FedEx marked “overnight special delivery from Amazon.” I was surprised because I had not ordered anything from Amazon that week. I read the return address before opening the box and it said “Amazon Future Engineer.” That’s when I realized that it was regarding the Amazon scholarship that I had applied for earlier in the school year.

I quickly opened it and found a congratulatory letter, certificate, and some other items, such as an amazon engineer hydro flask, beanie, pop socket and other documents. The scholarship consists of $40,000 toward my tuition and a paid software engineering internship at the Amazon headquarters in Seattle. Receiving this award was a wonderfully exciting and invigorating experience. The first thing I did was yell out to my sisters and parents and share the news with them!

But wait, that’s not all. Four days later, I was pleasantly surprised once again. Amanda Gilroy, my English teacher at CCA and National Honor Society adviser, had asked for me, as the NHS chapter president, to attend a meeting with her on March 27. I wasn’t sure what the meeting was going to be about but when I logged into the Zoom room, I was perplexed that there were more than 20 participants, including Mrs. Gilroy.

Then, JoAnn D. Bartoletti, executive director of the National Association of Secondary School Principals, introduced herself and said that I was selected as the national winner of the $25,000 National Honor Society Scholarship. She said that when the NHS formed more than 100 years ago, I was the type of student that they had in mind when they created the organization. For that reason, they had chosen me as the winner from nearly 7,000 applicants. I am usually quite outspoken, but this surprise had initially left me speechless.

The application process was pretty routine. I was initially a little bit reluctant thinking that there were going to be so many other applicants which were more qualified than myself but Mr. Courtright said that in life we miss every shot that we never get up to take and he suggested that I fill out the applications. That inspiration moved me forward.

The project is apt to change but will most likely be developing software or an app for the purpose of “Right Now Needs.” I expect my work will be primarily geared toward disaster relief – pandemic and climate change – fighting childhood hunger and family homelessness. In addition to my work, my fellow cohort and I will participate in various activities that bond us and expose us to Amazon’s technology and senior leaders.

I am using the 33 college credits acquired through CCA’s College in the High School program to graduate early. At the age of 19, I expect to earn my bachelor’s degree in information technology from Central Penn College. I will continue working toward an advanced degree.

My future life goals are to work as an attorney for the ACLU where I will be able to protect the rights of disabled individuals, and I also plan to run as a PA state representative.

Madison Lucey is a CCA senior from Scranton.