Everyone knows the mega-superstar Instagram cats like Grumpy Cat, Nala Cat, and Lil Bub (all of which I love with my whole heart). If you’re an avid cat lover (such as myself), and looking to make some lesser-known cat accounts blow up, here are some suggestions sure to make your heart melt. Just make sure you don’t let your own cats know that you’re liking other cats’ photos, or he/she might get jealous. I have so many wonderful cats I want to feature, so there will probably be a part 2 to this in the next issue of the paper. Also, these are in no particular order because how could I possibly pick favorites? That’s right. I can’t. 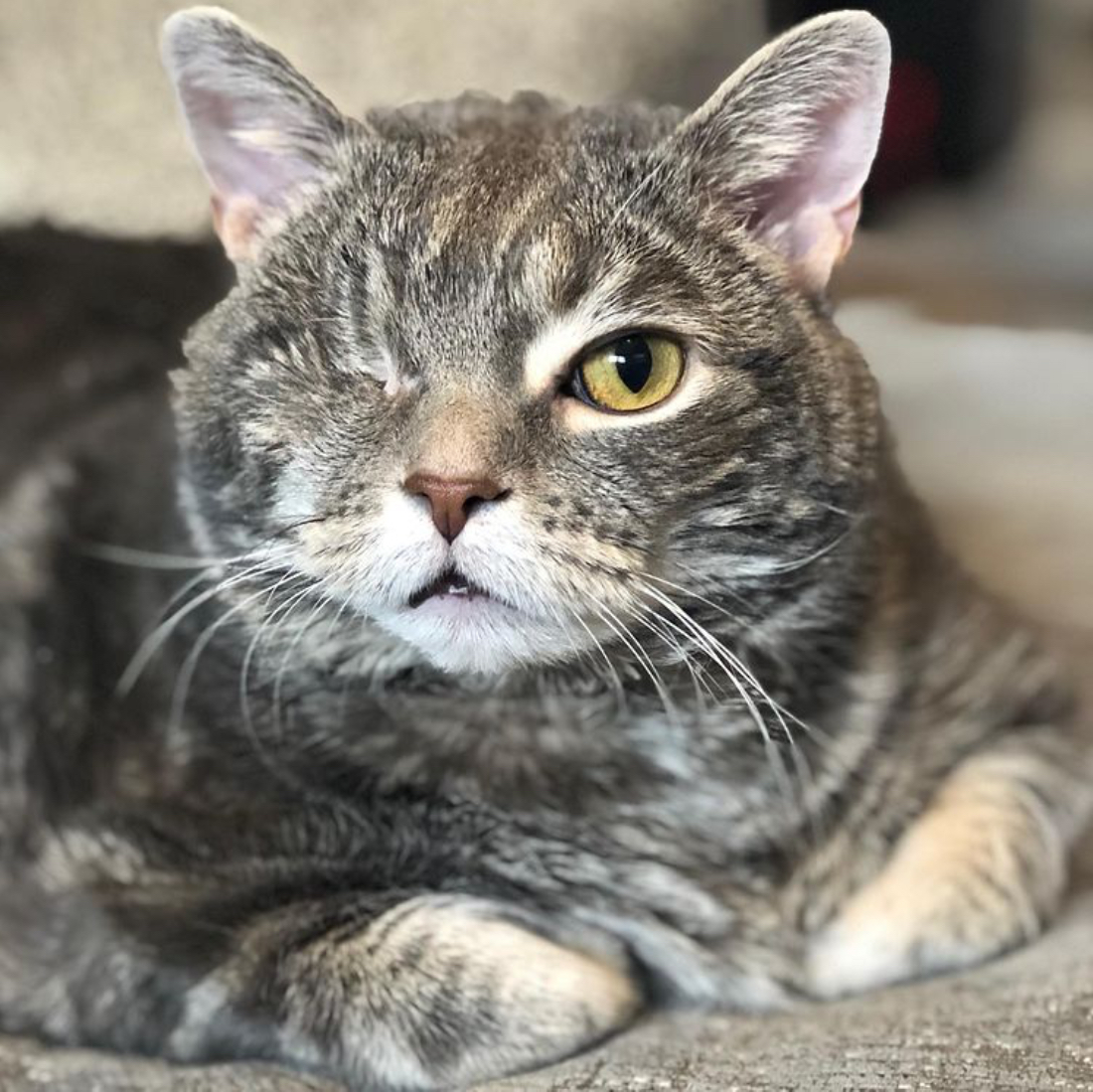 Who couldn’t love this adorable cat? Little Guy is a beautiful gray kitty with only one eye! Despite this, he’s living his best life. He has amassed over 16,000 followers, so he’s off to a great start. He was named “Chonk of the Year 2020” by the account @weratechonks, which does contests to find the chunkiest cats out there. Little Guy currently weighs 24 pounds. He has asthma and uses an inhaler. He does have to take medications which contribute to his weight gain, but he is dieting. Little Guy has over 500 posts which consist of adorable pictures and videos of him hanging out, to wishing fans happy birthday. You can probably spot him wearing a cute bandana in most of his posts! 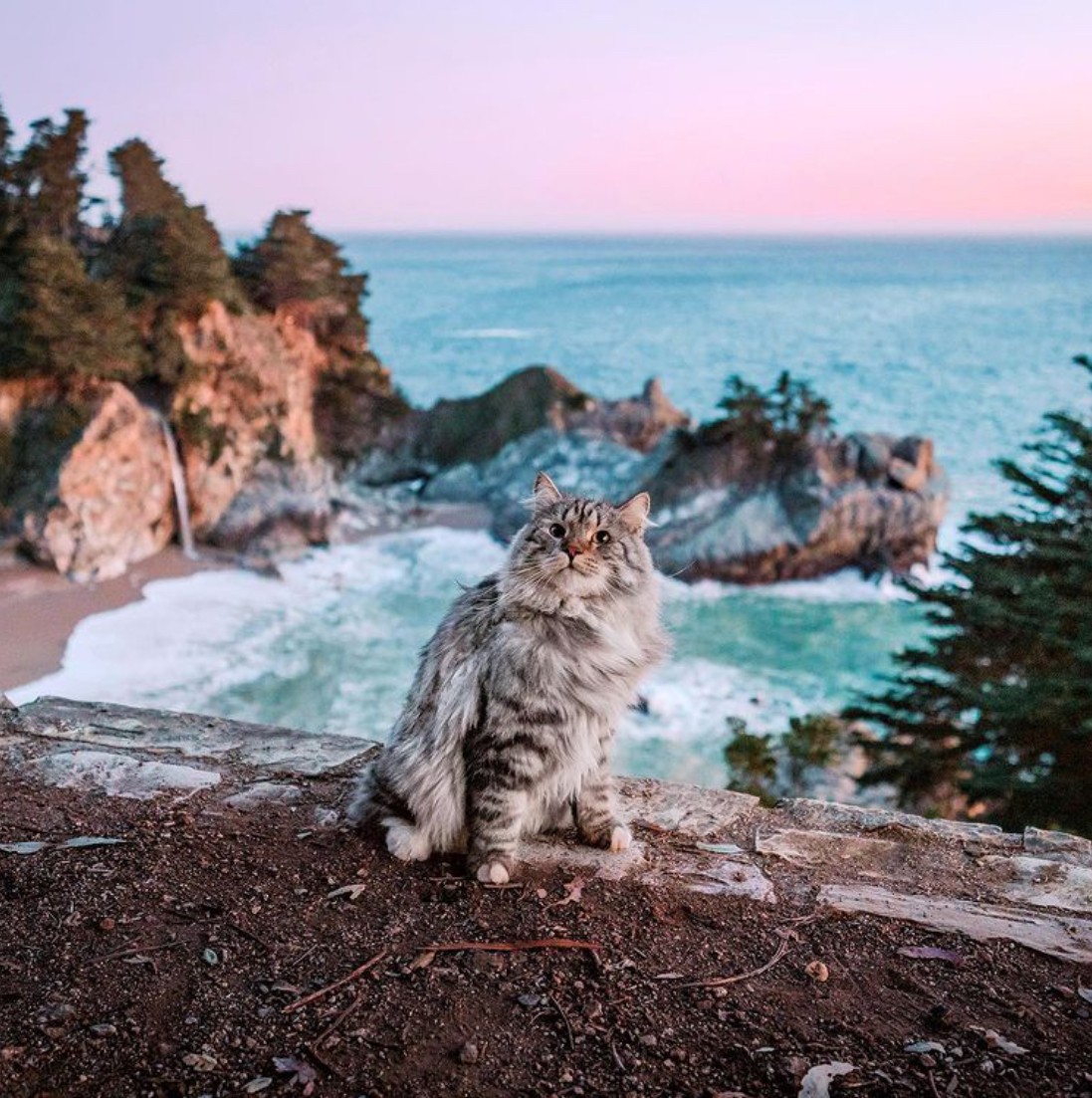 If you like gorgeous, vivid scenery and beautiful, fluffy cats, Sterling won’t disappoint! Sterling is a Siberian travel and adventure cat based in San Diego. He has gathered 127,000 followers and has over 340 posts. The stunning backgrounds of the photos are impressive by themselves, but add Sterling to the photo and it instantly becomes 100 times better! Some of the many places you might spot him are the beach, in trees, by flowers, forests, and more. He even has many pictures of him wandering through snowy areas. Viewing photos on Sterling’s account is like traveling to these places without having to move from where you are. Be sure to check out Sterling’s videos as well to see this beauty in action! 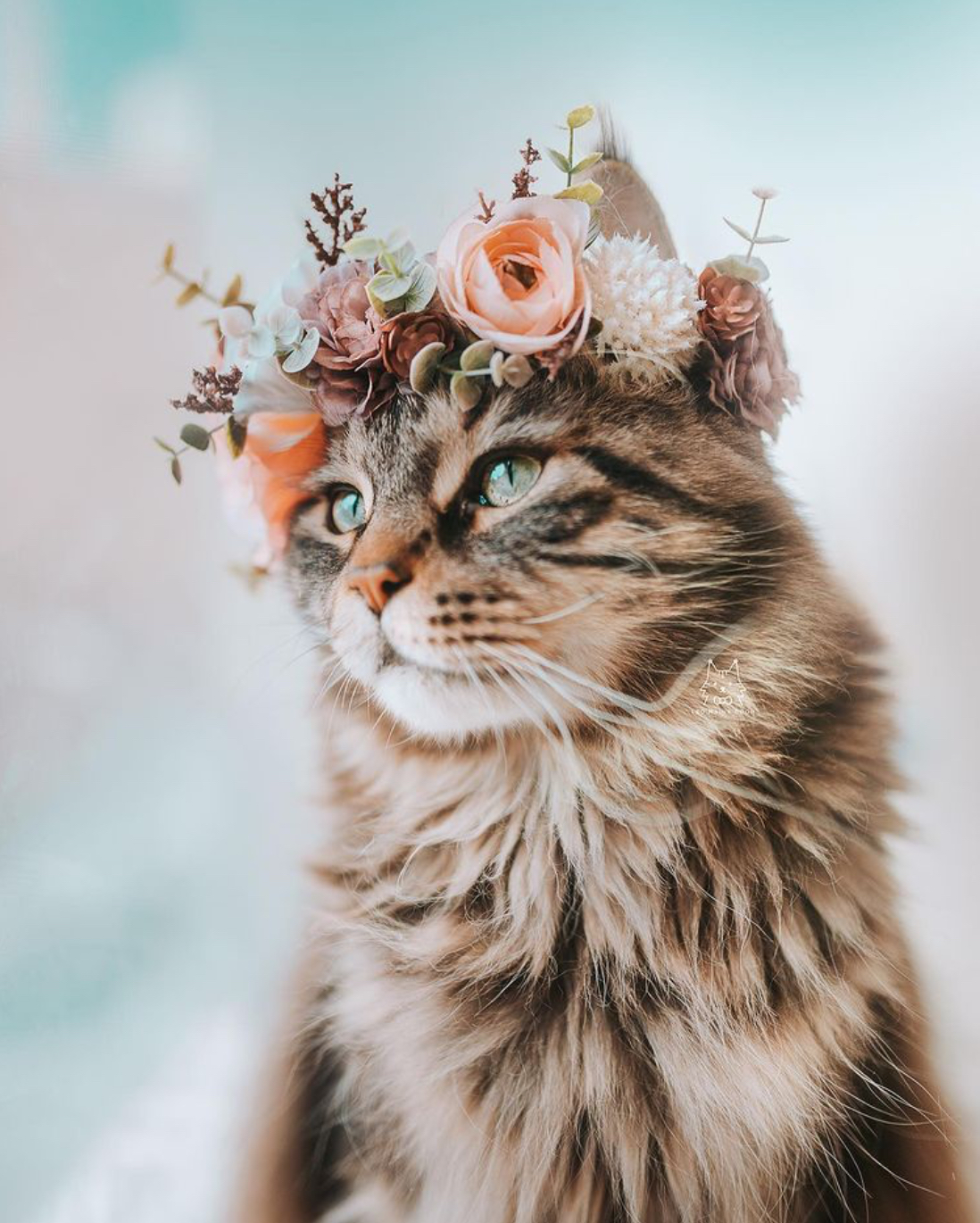 The stunning photography skills of this account are sure to impress you with just the first photo. Based in Chicago, Leonidas (his real name) has 184,000 followers and over 1,300 posts! The more you scroll, the more you’re going to see breathtaking, surreal photos of gorgeous Leo in fancy flower crowns. The pictures in general have a very relaxing and laidback feel because of the colors and filters. There are also videos on this account for you to enjoy. The filters/presets that are used on Leo’s photos are actually available for purchase, so you can use them as well, and they also have some other items available. You might also catch glimpses of two other cats, Lucy and Sophie, in Leo’s posts! 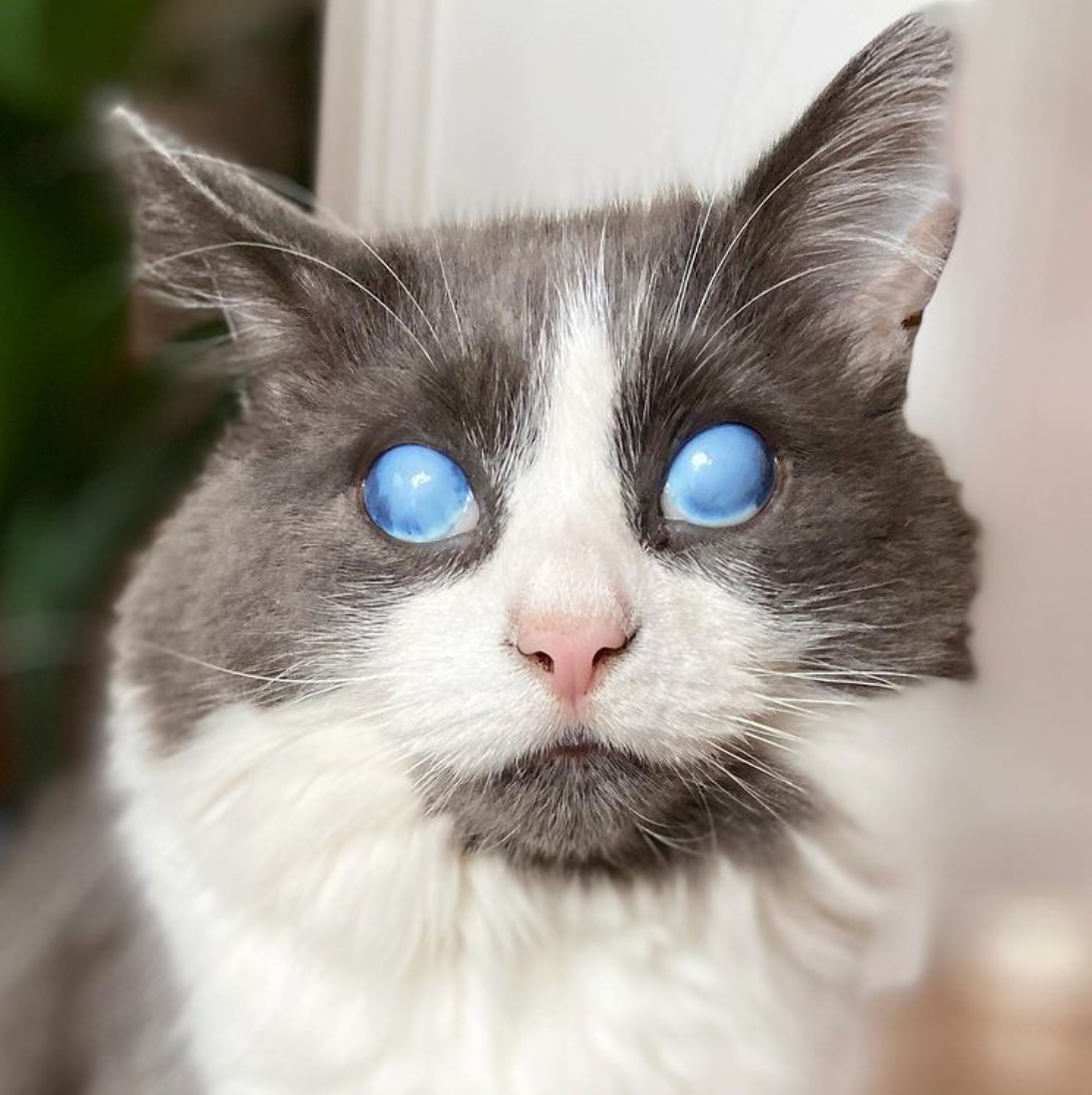 Louie is a gray and white, happy cat who is blind, but similar to Little Guy above, that doesn’t stop him from making the most out of each fun-filled day. Even though he is blind, his eyes appear as a sky blue color, but it doesn’t look like a typical iris. No pupils are visible either. Not only that, but he also has stage two kidney disease – so he’s a true champ! He lives in East London with a cat sibling Kamel, who has three legs and is considered a “lizard in disguise.” His owner has a huge heart welcoming these two into the home – but that doesn’t mean they’re loved any less. Louie has amassed 104,000 followers and has over 600 posts. Living his daily life includes activities such as messing around with his sibling. Nothing can get into Louie’s way, not even health conditions! 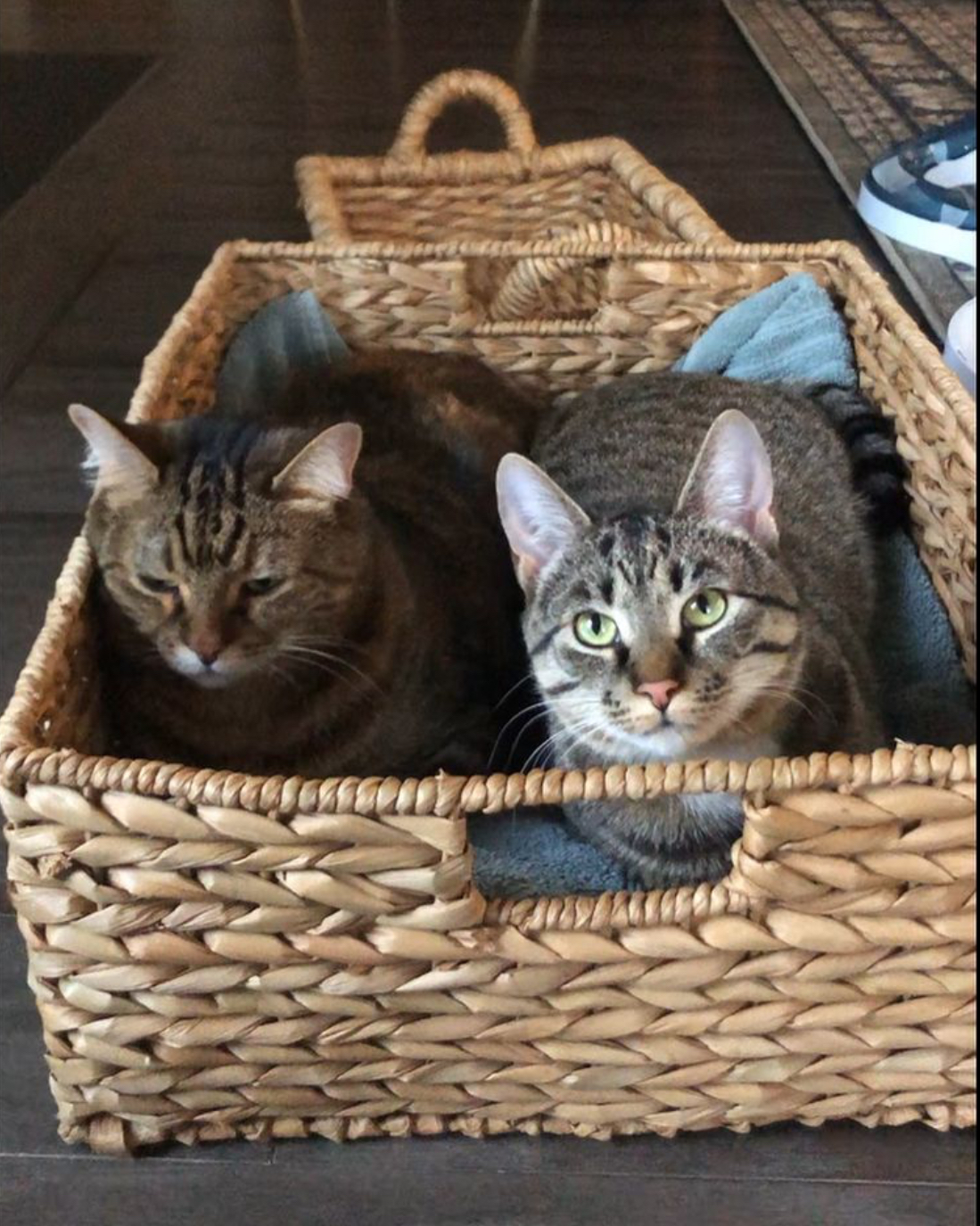 I love funny cats, and these two never disappoint! These two mackerel tabby siblings make hilarious videos (they also have photos) where Kiwi, the younger cat, refers to Chloe as “bestie” and argue a lot. Kiwi’s words are in green, and Chloe’s are in pink. Chloe doesn’t seem to like Kiwi’s presence in the videos, because they’re made to look like she’s always aggravated with Kiwi. Don’t let that fool you! They’re adorable cats who can be found occasionally hanging out together (peacefully, might I add). They have over 500K followers on TikTok, and on Instagram, they have over 28,000 followers and 78 posts. Maybe these two just need to bond a little more, but don’t all sibling relationships look like this?

Spring 2021, The Comet, Trending and Entertainment